Home Automation Brought Back to Life

Posted on September 17, 2013 by Taylor Moellers

“Very few people want to spend $2,000 to control the thermometer and some lights. For home automation to enter the mass market, it will need to allow the consumer to affordably buy a single product that solves a single problem.” – Home Automation Is Dead

Do I want to spend $2,000 for a home automation system? As a broke-as-a-joke graduate student there’s absolutely no way I could afford that. And even if I could, I wouldn’t want to shell out that kind of dough. And yes, I agree that products designed for a single purpose—to solve a single problem—inherently make them easier to use and more accessible.

In many ways these products are “keeping the solution much easier,” but I find the prospect of having to put together combinations of devices and applications on my own a bit daunting. It does give consumers the ability to pick and choose what they want to control; some people may only be concerned about controlling the lighting in their home and thus one product/one application may work best for them. But as I get further into the world of home automation, it seems to me most people want more than that. They want to set the lights to come on at a certain time, set the thermostat to cycle through temperatures throughout the day, set door locks and temporary pins, and so on and so forth.

Yeah, it’s cool that these products exist individually and I agree that seems to be where the market is heading. But really, who wants to set up 3+ different devices, all with their own protocols, setups, apps, user interfaces, and tech support? No one, that’s who. No one wants to open five different apps on their phone to turn on this light, turn off that light outside, turn the heat up a few degrees, unlock the door, etc. Instead of making life easier, that just sounds like a huge headache to me.

And back to the “very few people want to spend $2,000…” I think even the uber-rich and super geeks would rejoice at a more affordable option. Well guess what? My whole system costs right around $700.

An ERGY Plus account is only $40 for a two year subscription. The Energy Package from MiCasaVerde comes with a Z-Wave Programmable Thermostat, 1 Smart Switch, and a Controller. I also have 2 Home Energy Monitors (HEMs), 1 additional Smart Switch, 1 dimmer switch, and 1 outlet.

And ERGY really goes beyond traditional home automation. As I mentioned before, I’m working on my Masters’ degree with a focus on Energy and Sustainability. I care about the environment, where my energy comes from, and how much I’m using. Because I know that I have an impact on where the world is headed. I’m also a real person, with needs and wants just like everybody else. I love the fact that I can see how much and how many dollars’ worth of electricity you used at any given moment. Right now I’m spending $0.20 per hour doing laundry and watching The Office on Netflix. 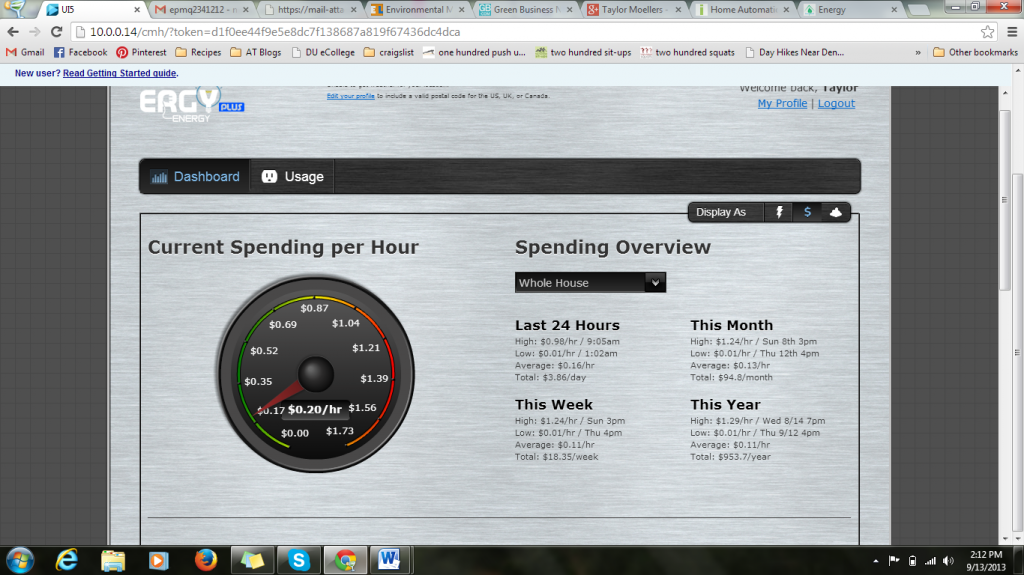 See! I do laundry. Just because I care about the environment doesn’t mean I smell like patchouli. Ironically enough, it seems I’ve started to get up on my soapbox.

Back to the matter at hand, I agree with ShortCode’s qualified statement “Home Automation is dead as we know it.” Home automation has traditionally been out of reach for the average Joe and Jane. It’s just been too damn expensive and in response consumers have been demanding affordable, easy to use, single solution products. I think these single use products are really going to whet the markets appetite for more comprehensive home automation systems. This is where I see systems like ERGY coming in. Not only does ERGY give you full on, bad-ass home automation, but it gives that extra piece of awareness about energy use.